The purpose of a Trademark Cease and Desist letter is to notify an alleged trademark-infringer that there is indeed trademark infringement underway and stipulate the trademark holder’s demands and threats if those demands are not met. Trademark Cease and Desist letters elicit wildly different mental and emotional reactions, depending on whether you are on the sending or receiving end of these letters. This article will cover this topic in depth.

To underscore the immense importance the Federal Government places on protecting ones trademark rights and the fundamental purpose of enforcing trademark rights, it is worthwhile taking a deeper look at the Lanham Act, which is the federal legislation governing trademark law. Congress enacted the Lanham Act in 1946, 15 U.S.C. § 1051 et seq. (“Trademark Act”) and explained that the statute served dual purposes:

One is to protect the public so it may be confident that, in purchasing a product bearing a particular trade-mark which it favorably knows, it will get the product which it asks for and wants to get. Secondly, where the owner of a trade-mark has spent energy, time, and money in presenting to the public the product, he is protected in his investment from its misappropriation by pirates and cheats. Senate Rep. No. 79-1333 at 3, 5 (1946).

This is a remarkably powerful affirmation because of its scope and comprehensiveness; simply, the purpose of the Trademark Act is to guard against scenarios by which the introduction of a potentially infringing trademark would lead to consumer confusion AND it protects owners of more famous and ubiquitous marks from blurring or tarnishing of their image, even if there would not be consumer confusion! 15 U.S.C. § 1125. More on blurring and tarnishing later.

Hopefully, it has now become apparent that monitoring and enforcing ones trademark rights is absolutely essential and to this end, trademark owners have several tools and resources available to them to effectively (and proactively) monitor the emergence of new trademarks in the USPTO and the broader marketplace. Specifically, trademark owners should frequently screen;

Trademark owners who are actively involved in their industries may very well simply stumble across an infringing trademark (if a startup shoe company called itself “Badidas”, you can bet Adidas would hear about it) but more often than not, trademark owners will hire trademark lawyers to actively monitor infringing trademarks on their behalf. Here, the trademark owner will instruct his trademark attorney of the desired scope and breadth of search parameters, according to the owner’s industry and frankly, budget. The hired trademark attorney will then provide a bimonthly search report, including potentially problematic United States trademark registrations and even foreign trademark registrations along with an analysis of the severity of the problem (how much conflict is there between your mark and the violator’s trademark). Next, the trademark owner must decide along with his attorney if the nature of the violation may warrant enforcement measures, starting with a trademark cease and desist letter. 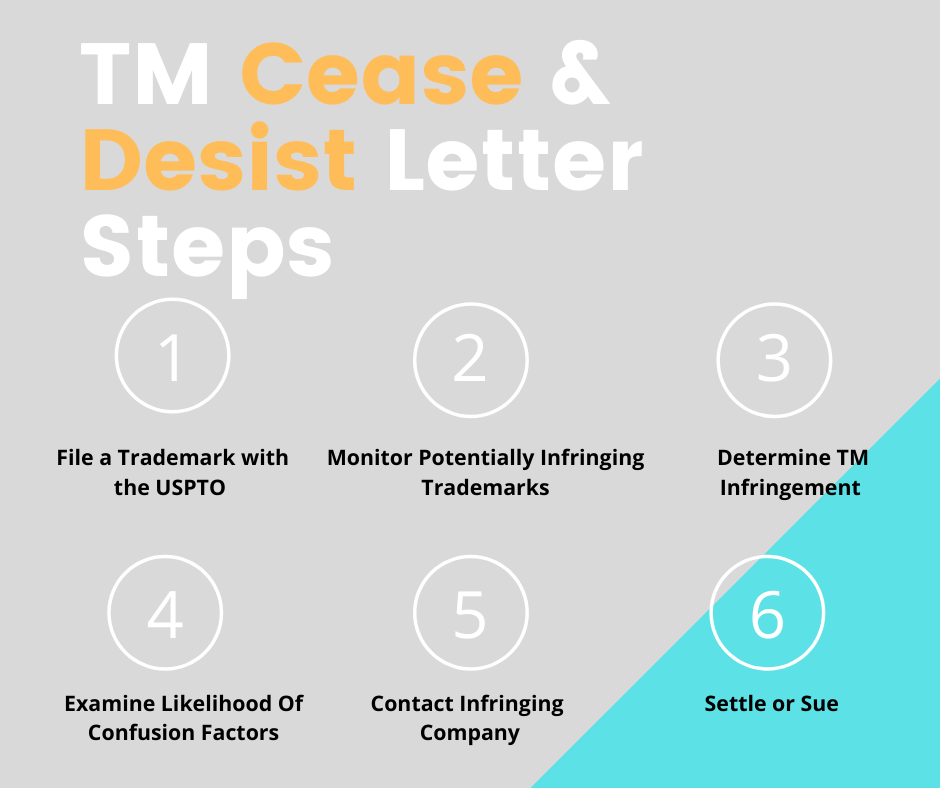 Trademark Cease and Desist Letters; How to Know when they are Justified

Depending on whether or not the trademark attorney determines that there is indeed a sufficiency of similarity between the trademarks and/or the goods services, he may advise the trademark owner to either commence action against the potential infringer or refrain from expending resources on an unwinnable proceeding.

This “sufficiency of similarity standard” either vis-à-vis the marks themselves or the goods/services, falls under the likelihood of confusion legal doctrine, which is used to determine if trademark infringement has occured. Simply, would a consumer who views this new trademark come to believe that the source of this new trademark is the owner of the original trademark (a person seeing “Badidas” on shoes might think the Adidas corporation created them).

Before recommending a cease and desist letter, the trademark attorney is going to ask himself, what are the chances my client would actually prevail on a claim of trademark infringement?

Well, to mount a successful case of trademark infringement, the plaintiff will need to establish that he does in fact own the trademark, that he has a priority use of the trademark vs. the defendant’s use of the allegedly violating trademark, and finally, that there would indeed be a likelihood of confusion (or dilution/tarnishment – more on that later).

As to whether or not there would in fact be a “likelihood of confusion”, every Federal circuit court unfortunately has a different standard of review and uses its own multi-factor test but ultimately, nearly all circuit courts use the same basic factors;

Less frequently, trademark cease and desist letters are sent when the trademark attorney determines that there may not be likelihood of confusion between the marks but there would be a risk of dilution or tarnishment if the infringing marks were to continue to be active in the marketplace. Simply, if the trademark holder can demonstrate that its trademark is sufficiently famous (like Gucci), then one cannot register a trademark on Gucci even for unrelated goods to Gucci’s primary goods and services. The idea here is that if a new Dog Food company were to call itself Gucci, the fact that no reasonable consumer would think THE Gucci is the proprietor of this dog food company does not matter; having a dog food company named Gucci is itself an injury to the Gucci brand and a very good reason to send a trademark cease and desist letter.

It is easy to take for granted that a trademark owner would automatically pursue enforcement measures if his trademark attorney provides assurances that the holder would have a good chance of prevailing, but the truth of the matter is that there are practical considerations, weighing both in favor and even against pursuing enforcement actions, that may supersede the legal analysis vis-à-vis the plaintiff’s chances of success. Consider for the moment the case of a small-time soft drink startup who develops a trademark that Pepsi thinks infringes on its own mark. Let’s assume for the moment that Pepsi has a horrible case and no Court would ever find in Pepsi’s favor; If Pepsi were to send this poor startup a trademark cease and desist letter, the startup needs to ask itself if it has the financial resources to fight this complaint or instead, if it would simply make more financial success to buckle and stop use their (legally) non-infringing trademark.

Conversely, imagine for the moment that the small startup has strong and distinctive trademark rights vis-à-vis soft drink beverages, and comes to notice that another startup has started to use a very similar trademark and also for the soft drink category. If this startup believes that the market-threat posed by this other startup is small and unimportant, the startup may decide that pursuing enforcement actions against the infringer is just not worth the financial cost and effort.

Nearly every trademark enforcement action will begin with a cease and desist letter.

The substantive purpose of a cease and desist letter is two fold; 1. to notify the alleged infringer that the trademark holder believes that trademark infringement is underway and; 2. To instruct the alleged infringer of the demands of the trademark holder vis-à-vis injunctions of use and monetary compensation. Administratively, there is in fact a much more important reason for the cease and desist; to secure an early resolution of the matter so that the plaintiff does not need to expend the enormous resources associated with litigation.

Trademark Cease and Desist Letters: Here’s What They Look Like

Trademark Cease and Desist Letters Are Not All Created Equally

Naturally, not all cease and desist letters are drafted with the same intent; when the trademark owner has a strong case, the letter will likely be more aggressive and urgent in tone, threatening litigation if the infringer does not comply with the requests, while cease and desist letters from trademark owners with a weaker case will typically be more conciliatory and open to negotiation.

It is perfectly understandable to be nervous and even scared upon receiving a cease and desist letter but it is important to not freak out just quite yet. The fact that you received the letter DOES NOT mean that you have officially been sued or that you are even going to be sued.  If a Federal lawsuit has in fact been filed against you, you will be served a complaint (a requirement by law) outlining the plaintiff’s claim against you and an accompanying document which is called a Summons. The former stipulates the basic position/claim of the plaintiff while the latter outlines the procedural issues at hand including which court the suit has been filed in and the relevant procedural information surrounding the suit (case number, when you need to respond by etc.). These formal documents will either be presented to you personally or directly to the registered agent of your business.

How to Respond to a Trademark Cease and Desist Letter

Undoubtedly, the recipient of a trademark cease and desist should consult with an experienced trademark attorney to review the letter and evaluate the merits of the complaint. Fundamentally, the trademark attorney will advise proceeding in one of the following ways;

If the trademark cease and desist reads like a frivolous harassment complaint without any serious merit, the trademark attorney may suggest completely and unyieldingly rejecting the allegations of infringement and responding with a letter outlining the legal and factual reasons for reaching this conclusion. This will hopefully put the matter to rest

Sit Tight, Do Nothing

It may be the case that the trademark holder would be amenable to some sort of settlement where you can either obtain a license to use the prospective mark or even settle on an agreement stating that no infringement has taken place (an often more expensive proposition.

In the event that you (along with your trademark attorney) are feeling particularly bold, you may decide to go on the offensive and file a lawsuit for a Declaratory judgment; this would be a powerful achievement and effectively serves as a court decision stating that your mark does not infringe on the trademark owner’s mark.

Speak with a Trademark Attorney

Whether you’ve received a Cease and Desist letter or need to respond to one, please feel free to reach out and request to speak with one of our trademark attorneys to discuss your case. We’re here to help.

Have a question? We want to know. Contact a Trademark Lawyer today.