Principally, there are three symbols that are most commonly associated with signifying trademark rights: Circle R (®), TM, and SM. Depending on the nature of the goods/services sold and the status of the trademark application with the USPTO, one or more of these marks may be appropriate.

A trademark is a branding asset which is anchored to a good/service; namely, a company name, logo, or slogan. Logos, in particular, are powerful trademarks and are typically artistic illustrations that are presented in either color or black/white form. If a trademark applicant is interested in protecting the proprietary color scheme of the logo, the application must reflect the designated colors. 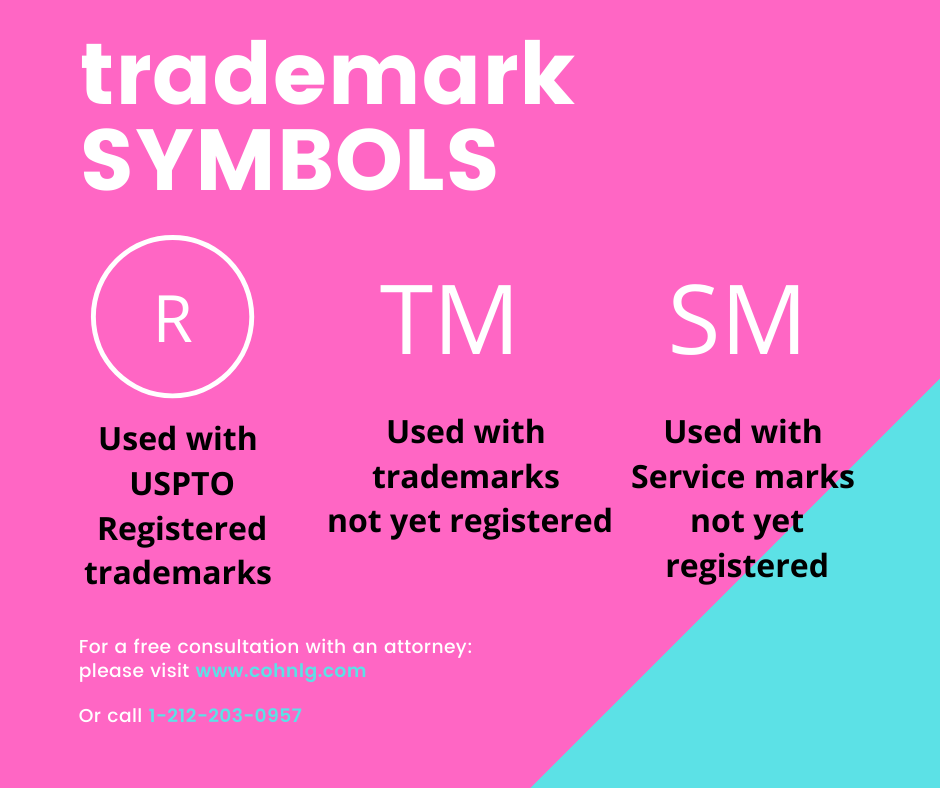 WHAT IS A TRADEMARK?

Remember, a trademark is a branding tool that when attached to a good or service, identifies the source-company, which sells the good or service. Common trademarks include names, logos, phrases and even sounds. However, if the prospective trademark is not actually used in conjunction with a sale, these clever branding items are not bona fide trademarks and are not subject to trademark protection. Moreover, in order for a mark to qualify as a protectable trademark, bona-fide sales of the good/service must be sold in interstate-commerce. So, to satisfy these criteria, an applicant who lives in the State of New York must sell a substantial amount of his/her product to a consumer in a different state (ex. California).

TM: The TM stands for Trademark and may be used when the prospective mark is tethered to a good (books, clothing, rugs etc.). An individual need not actually have a registered trademark with the USPTO in order to put the TM symbol adjacent to the mark itself. Indeed, the TM makes absolutely no claim to the registration status of the mark with the USPTO but still serves the important purpose of notifying competitors that the mark is at least used in consideration with the desired goods. Critically, use of the TM does not by any stretch of the imagination confer trademark rights and cannot guarantee that the mark will be protected under trademark law.

SM: The SM stands for Service Mark and may be used when the prospective mark is tethered to a service (accounting, bookkeeping, legal services, personal training services etc.), rather than a good (clothing). Similar to the TM symbol, an individual need not actually have a registered trademark with the USPTO in order to put the SM symbol adjacent to the mark and yet the SM still carries the very important symbolic meaning of, Use-in Commerce, with the designated service. The SM symbol is rather idiosyncratic to the United States, which favors distinguishing SM from a TM. In most other countries, the TM covers both goods and services, rendering the SM symbol rather redundant. Critically, use of the SM does not by any stretch of the imagination confer trademark rights and cannot guarantee that the mark will be protected under trademark law.

®: The Circle R symbol is perhaps the most well known and certainly the most coveted and can only be used upon receiving an official trademark registration from the USPTO. Indeed, if the applicant were to apply for a trademark with the USPTO and begin using the Circle R symbol before obtaining a registration number, the applicant would be in violation of federal law and will likely have his trademark application rejected. Thus, this trademark symbol serves the essential purpose of providing constructive notice of the legal ownership of the mark. The aesthetics of the Circle mark, like the TM and SM, is important to note and typographically, drafted as a small superscript sign.

STEPS TO GET A ® TRADEMARK SYMBOL

WHERE SHOULD I PLACE MY TRADEMARK SYMBOLS?

Typically, and in fact nearly always, the trademark symbol (irrespective of whether or not it is a TM, SM or ®) is placed on the top right corner of the mark. In the event that the applicant chooses to use regular sized typography for the symbol, it is entirely acceptable for the trademark symbol to be placed immediately next to the end of the trademark.

HOW TO TYPE THE TM SYMBOL

SHOULD I INCLUDE THE TRADEMARK SYMBOL IN MY TRADEMARK APPLICATION?

WHEN CAN I USE THE TM SYMBOL AND WHICH ONE TO USE?

Remember, different rules govern the use of different TM Symbols.  A “TM” may be used before registration of the trademark in the USPTO and even before any trademark application has been filed with the USPTO.  Indeed, the “TM” is simply meant to indicate that the trademark enjoys common law protection and rights.

The USPTO considers the use of using the correct trademark extremely seriously.  To underscore the importance of only using the Trademark Symbol that is appropriate for one’s mark, consider TMEP 906.04.:

This is a very serious matter.

In the event that the examining attorney even suspects that fraud has occurred in the filing of the trademark application, he must

And on and on it goes. DO NOT commit Fraud with the ® TRADEMARK SYMBOL.

FOREIGN COUNTRIES THAT USE THE ® TRADEMARK SYMBOL

While the United States is arguably the most commonly associated country that uses the ® Trademark Symbol, other countries throughout the world also rely on this powerful symbol to alert competitors of proprietary trademark rights and designate registration. In the event that a foreign applicant has made use of the symbol on the specimens submitted to the USPTO based on a registration in a foreign country, such use of the trademark symbol is deemed appropriate.

The following foreign countries also use the ® Trademark Symbol:

CAN I USE THE ® IN MY TRADEMARK IF I HAVE IT REGISTERED OUTSIDE THE US?

NO. Trademark rights are not universal and one can very well have a trademark registered in a foreign country without having a federally registered trademark from the USPTO in the United States.  To use the ® symbol in the US, you must have a US Registered Trademark.

Again, Trademarks are governed on a different basis according to the Jurisdictions of the Countries in which the trademarks are in use.  While the United States may place supreme importance on the ®, other countries have different practices and standards. The TM symbol, for example, is an artifact of the English Common law system and as a general matter, not recognized across most European countries.  Without exploring the exact rules and stipulations of the correct symbol to use in every country, it is sufficient to note that if you do not have a registered trademark in the specific country in which you are selling your product, you should ere on the side of caution and not place ® next to your trademark.

I HAVE A ® TRADEMARK SYMBOL AND SOMEONE IS USING MY MARK : WHAT CAN I DO ABOUT IT?

Trademark infringement occurs when a competitor has used a sufficiently similar trademark in conjunction with the sale of a sufficiently similar set of goods/services. For example, if a new technology company were to start selling phones under the trademark “ALPPLE”, this company would be infringing on the Apple company’s trademark rights to its mark, APPLE. In this case, the Apple company would send a trademark cease and desist letter to ALPPLE and very likely commence legal action against the infringer.

Naturally, depending on which computing device once is using and the corresponding keyboard/touchpad, different shortcuts will be available for the user to input the appropriate TM Symbol/s. Here are several coding tools to assist one in representing the TM Symbol digitally:

Speak with a Trademark Attorney

Registering your trademark correctly from the start is important. Please feel free to reach out and request to speak with one of our trademark attorneys to discuss your idea. We’re here to help.

Have a question? We want to know. Contact a Trademark Lawyer today.

Abe is managing partner of Cohn Legal, PLLC, Head of the firm’s Intellectual Property and Transactional Group, and works in the New York office in Midtown Manhattan. Abe is committed to his client's success.